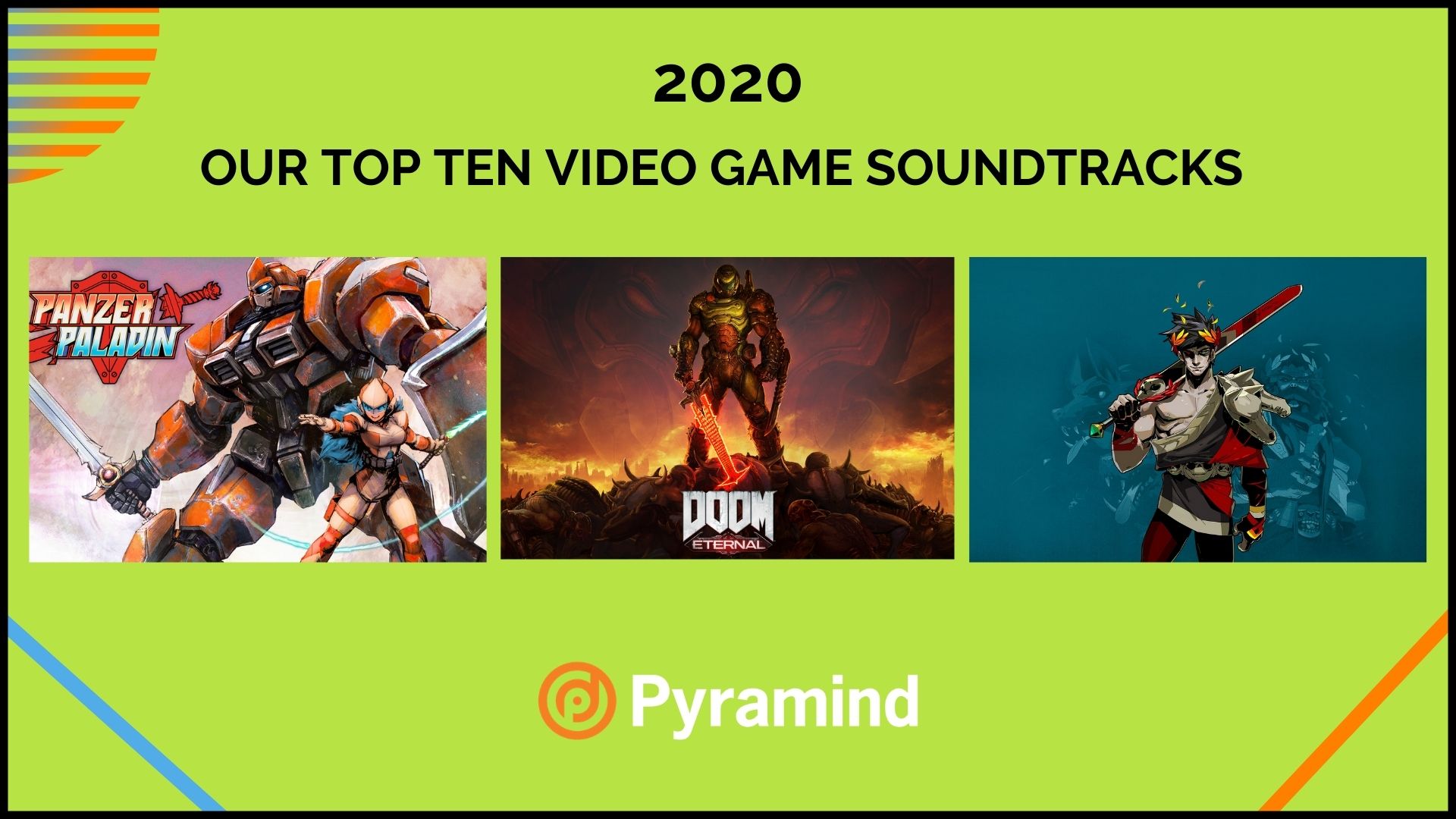 Our Picks for The 10 Best Video Game Soundtracks of 2020

Video game soundtracks take talented composers, arrangers, musicians, producers, and audio engineers, thousands of hours to produce and they make up for a huge amount of the in-game experience. In this blog post we want to share our picks for the ten best video game soundtracks of 2020.

You had to know this was coming. Mick Gordon served us with a magnum opus in 2016. Following that, he’s continued to rip and tear our eardrums with 2020’s newest installment of ID software’s classic series.

From sine waves passed through ridiculous amounts of gear for pure analog distortion, the screams and squelches of hoards or different demons, to a literal choir of heavy metal singers/screamers.

No stone went unturned for the audio team in the Doom Slayer’s latest bone-crunching trip through Hell. Every sound is so in your face, so visceral, so purposeful, that not only do you FEEL powerful, you SOUND powerful.

All of this while still clearly communicating the games mechanics and design: your HUD elements sidechain the music so you can hear when your Blood Punch is ready, you can hear what kind of demon is around the next corner so you can prepare yourself. The sound in this game fits together very well.

If the Divine Comedy had a soundtrack, we hope they would tap Mick Gordon to compose it.

If jazz is all about the notes you didn’t play, Ghost of Tsushima is the video game equivalent. Taking a page from the audio of 2017’s Legend of Zelda: Breath of the Wild and adapting it to the 1200s invasion of Japan, Ghost of Tsushima envelops you in the living, breathing wilderness of Tsushima Island.

Often, your exploration is spent among the sounds of nature, birds, your horse galloping through the grass, the guiding wind at your back (and playing through your controller speaker), but when you interact with the environment is when the compositions shine.

When you happen upon enemies, a driving percussive battle theme plays and ends perfectly in sync with the death of the final foe; when you come across a fox den, a playful flute melody plays, or during the story sections, leitmotifs characterize every interaction.

The addition of a Kurasawa mode, with period-appropriate visuals, music, and sound design, is a fantastic plus to an already beautifully crafted game and fully voice-acted dialogue in multiple languages. 10/10 would recommend.

Darren Korb of Supergiant has never let us down. From the Western trip-hop stylings of Bastion to the newest offering from Supergiant, the GOTY contender, Hades, Darren keeps his innovation knob cranked to 11.

On the Hades soundtrack, he transformed traditional greek instruments into the METAL of the UNDERWORLD. Not all music in the afterlife is metal, and the diversity of these tracks immerse you in the struggles of Zagrius. While attempting to escape from the underworld with forceful combat music, enticing hub music, and even main-menu music that gives you fair warning about the quest on which you’re about to embark, every sound is immaculate. Check out our interview with Darren about Hades HERE.

Have you ever wondered what it would sound like if an actual metal band accompanied the Mega Man soundtrack? It doesn’t matter because that’s exactly what the Tribute Games team has pulled off with this soundtrack.

Driving double kicks push the soundtrack along under charming, catchy chiptune melodies. You know a soundtrack is good when you stopped playing hours ago, and you’re still whistling the tunes.

Paradise Killer is a beautiful soaring tribute to mystery games. Barry Topping has created a rich, environmental soundtrack. The game’s musical systems give the player so much freedom and control over the sound, including the moody flavor text for each one of the tracks. You owe it to yourself to check this game out. Check out our interview with Kaizen Games HERE.

This one may be a little unfair, but dang, are we suckers for nostalgia. The entirety of the licensed catalog for this brings us right back to that blue cartridge (or, y’know, regular PS1 disk).

The sound design has been updated for the modern era of gaming. Still, the soundtrack remains a hit list of classic skate punk, hip hop, pop-punk, ska, and more, with tracks from Goldfinger (of course), Machine Gun Kelly, The Ataris, Billy Talent, The Dead Kennedys, and A Tribe Called Quest.

The original version of this soundtrack introduced these artists to an entire generation of kids. The updated version brings all those feelings back in full force.

For a game primarily about death, Spiritfarer is dramatically understated. The game is washed with orchestral beauty and drowned in silky smooth reverbs from the title tracks dulcet piano-led ambient track to the Spanish-guitar-adjacent seafaring music an almost Disney-like quality.

The shipyards are rousting, the thunder is jagged and wild, but all while still retaining a sense of calm and purpose. Spiritfarer teaches you, among other things, that death can be beautiful, graceful, and peaceful. (And oh my god, I know this isn’t sound related, but you can PLAY AS THE CAT : )

Question: Is it possible to be nostalgic for a genre you didn’t even play growing up? Answer: yes.

SoR4 has brought Sega’s arcade classic to the 21st century with updated graphics, gameplay mechanics, and more while keeping the soundtrack a retro 80s arcade-inspired hit-list with fully modernized limitations.

It’s not the chiptune bangers you remember from the arcade cabinet, but you won’t be missing it. However, if you do, an entire secondary, alternate soundtrack in the audio settings labeled as “Retro” delivers what it promises, full 16-bit renditions of the existing soundtrack, with sound effects to match.

The Devil May Cry series has never been one for subtlety in its gameplay or its music.

DMC5 was a perfect return to form for fans of the series new and old, bringing back the original white-haired trickster and with remixes of classic DMC tracks, alongside band new compositions with insane wailing guitar-shredding, tense cutscene tracks, a groovy menu screen, and so much more. You owe it to yourself to listen to the song Devil Trigger, if not the entire soundtrack.

Yakuza: Like a Dragon, features some of the most bombastic soundtracks in a Ryu Ga Gotoku game to date. While many sound effects and audio queues are nods to older titles, Yakuza: Like a Dragon delivers exciting and head nod worthy battle themes that fans of Electro House, Dubstep, and Drum ‘n Bass are sure to love.

Want to try your hand at composing and producing music for video games? Check out our wwise certified Sound for Picture and Games program here.