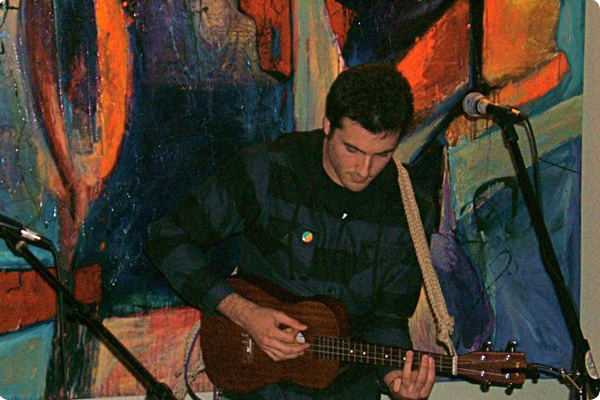 I just released my debut under the alias ‘King Kuula’ so I’m getting a small band together to play the material live over prerecorded bass and beats. Lots of instrument switches and that sort of thing, kind of a DJ/Performer mix up.

2. Talk about the album. What inspired it? How did it come together?

Well, it’s kind of a two parter. The first third is comprised of some more pop friendly tunes (kinda like the first half of Abbey Road) and then it goes into a more of a loose concept album feel. Lots of different genres that as a whole tell the story of a King who leaves his throne to slay a horrid beast that has been terrorizing his kingdom.

The song genres are all very different from one another, but musically there are a lot of themes and motifs that I throw around to connect everything. It kinda sounds like the Wailers backing band met Pink Floyd, the Beatles, and Gorillaz in a room full of archaic instruments. (add a dash of some wobbly bass and you’ve just about got it)

3. Describe the style of music you like to write.  What inspires you?

Anything and everything is on the table when I write. I like just about any style as long as it’s good! I’m a big fan of storytelling music and songs that take you somewhere else, but I do like a lot of downtempo electronic beats as well. I dig lighthearted and unpretentious tunes but I also love dark and serious music as well.

4. Everyone has their favorite tools.  What are some of yours, and why?

The instructors and staff are amazing to say the least. I was inspired daily and learned so much from everyone I worked with. They continue to support me and have been instrumental in my career.

Logic is definitely my favorite. So much of the originally included stuff I still use today! You can create some sweet sounds with the ES2 and I use EXS24 all the time for various sampling needs. Also my malletKAT is amazing for recording percussion related MIDI, mallets or drums.

5. How did you bring some of your favorite tools together on your new album?

I used a lot of EXS24 to manipulate some samples of various Mellotron tones (kind of a throwback to my favorite 60s groups) as well as to map out a full Square Grand Piano that I (painstakingly) sampled during my short stint as an antique piano salesman in the Westfield Mall. antiquepianoshop.com

All the synthesis I did mainly in ES2 and some other plugins. I recorded sax, vocals, and just about anything acoustic you hear with the BLUE Baby Bottle mic. I even used a Microtrack recorder to capture the elevator ambience in the Pyramind/Salvation Army building for “Time Machine”.

6. What are your future plans?

To promote my album by playing it live at different venues, and if that goes well I’ll do some sort of tour as well!

Stay focused! It’s easy to miss little nuggets of information in the collective (and vast) array of knowledge your teachers display.

8. How do you feel Pyramind best helped or prepared you for your career in the music/sound industry?

They’ve given me the knowledge and know-how regarding my tool set to feel confident enough to just get out there and just start something up. I had been hoping to release an album at some point and now I have!