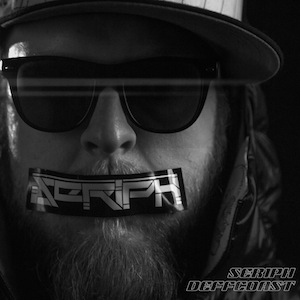 2017 Update: Seriph continues to drop new material every month or so. Make sure to check out his Soundcloud page to stay up to date with his latest material.

Best known for his dubstep productions and sets, Seriph is really a lover of all sorts of electronic bass music.

“I’m really trying to push the boundaries of the genre, all the while working with fusion of other sub genres to push the sound further. My music is loud, full of bass, eclectic, energetic, and most of all weird.”

Hailing from the hostile, frigid former Soviet Union, Seriph takes pride in representing the most evil corner of Deff Coast, a West Coast-based music collective, of which he a founding member. The San Francisco-based Seriph has been spinning dirt and grime for seven years and can be found twisting faces in the City’s dankest basements. When he’s not behind the tables, Seriph produces homegrown dubstep and bass hitters, and has recently expanded his repertoire as one half of the hip-hop/electro project HELLASAURUS.

Deff Coast Records is a new artistic collective based in San Francisco, CA. Deff Coast makes its annual human sacrifice atop the altar on the Temple of Bass. Bringing original hip-hop, trap, dubstep, and electro, we do not represent your typical EDM project. Deff Coast artists both stand alone and collaborate to produce interdisciplinary masterpieces. Discover something fresh with Deff Coast.

Deff Coast started as a simple event crew throwing small shows in the Bay Area, but grew to be a lot more complex and magical. The important factor however is from the beginning everyone shared the same passion and love for music and art. The natural evolution of Deff Coast brought everyone involved into music production. With this phase of our friendship and partnership , Deff Coast Records was born. Video production and editing for music videos MADE by members of the crew soon followed, but no one chose to take a break at this point.

Deff Coast is about tapping into your 8-bit, 90’s nostalgia-driven, child-like spirit and unleashing that creativity through all the means at your disposal. Auditory, Visual, and Mental are all important. It’s not just what you see, and what you hear, it’s what they do with that knowledge and how you portray that positive information through art and music. Deff Coast is group of like minded individuals that grew into a state of mind. Deff Coast is a Family.