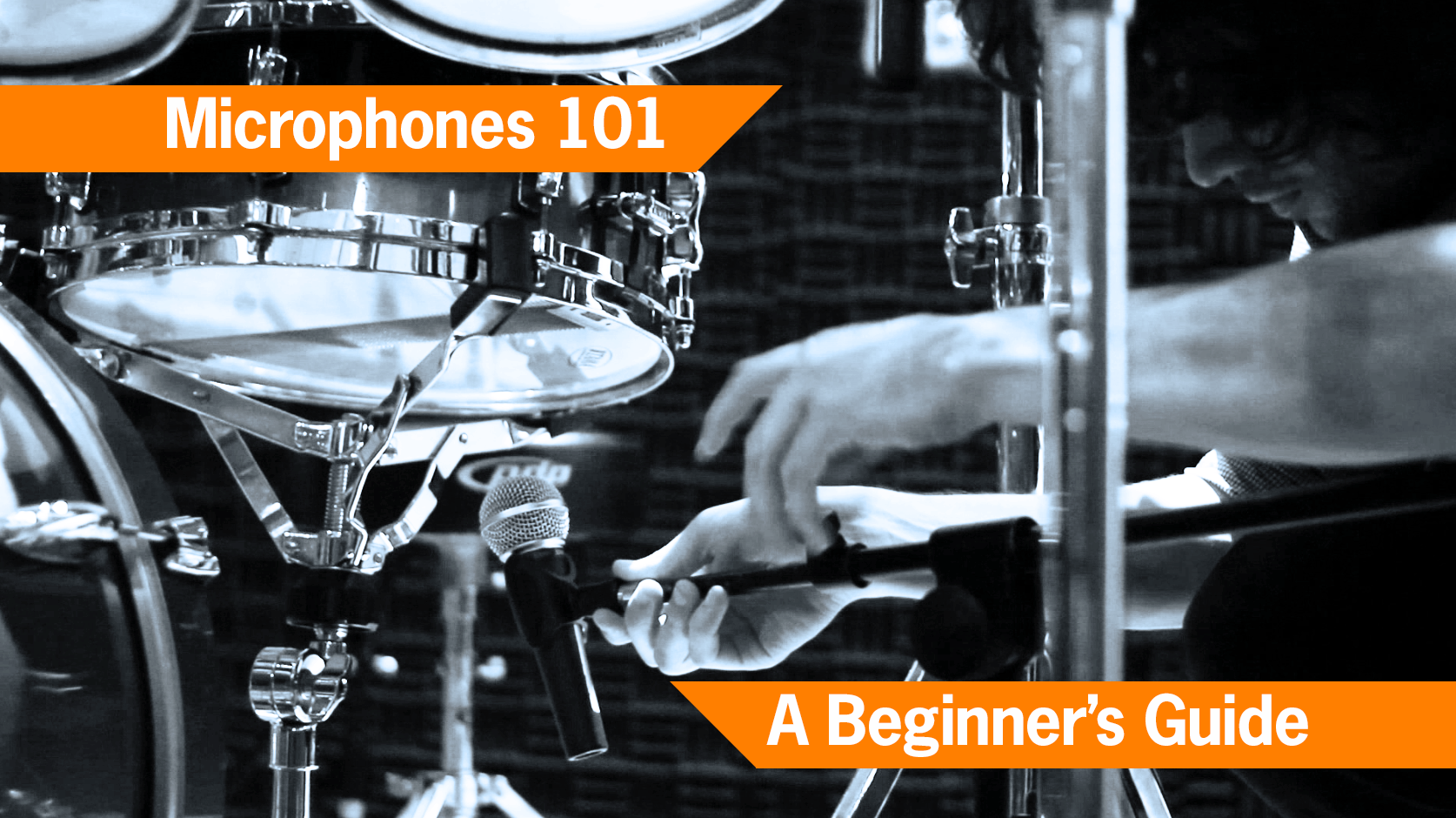 The microphone is likened to a camera lens—change lenses and you can change the quality or perspective of the picture. In this way, microphones are the “eyes” of the studio. How you hear your recording is a direct result of how the microphone hears the performance. This single point of transition from free sound to captured sound is the essence or recording.

A microphone is the first (and arguably the most important) transducer in the studio as it is closest to the free sound being emitted from the source.

In today’s audio world, there are four main types of microphones, three of which are used in studios every day.

Each of these mics work differently, and as a result, yield a different sound. Each has a purpose and a situation where it gives great results, and very rarely is there one type of mic (or one mic of any type) that’s perfect for every situation. Often, it’s the old favorites that we go to every day that get the most use for common situations. But what do you grab when the common situation becomes an uncommon one? Let’s explore the types of microphones, how they work, and what we think we can expect from them.

The dynamic mic is one of the most common types of microphones and is very versatile. Most clubs and live sound venues have a solid collection of them and for a good reason—dynamic mics can take a beating. The basic principle of the dynamic mic is an electrical principle called inductance. It’s the same principle that electrical generators use in river dams and turbines, which is that when a powerful magnet is wrapped in wire, an electrical current is created or induced as the magnetic field around it moves. In turbines, the change is created by its spin. 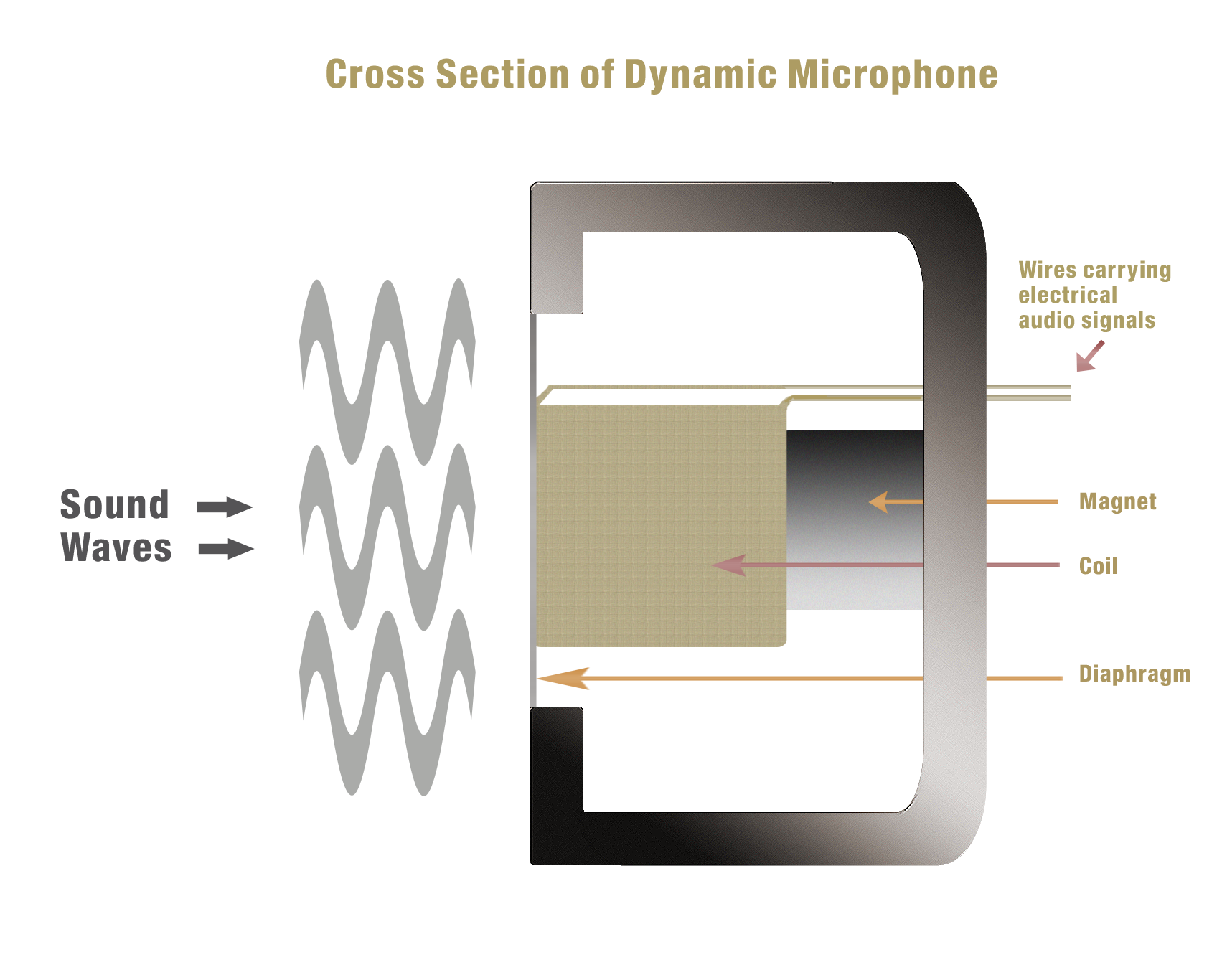 Inductance has been applied to dynamic microphones as well. Within the capsule, a set of wires are wrapped and suspended in a magnetic field, called the voice coil. Attached to the top of the wires is a thin piece of material (often Mylar plastic) called the diaphragm.

As sound enters the capsule, it hits against the diaphragm and moves the voice coil in and out of the magnetic field, creating an electrical current by inductance.

It is ironic that the dynamic mic is actually not as dynamic as its condenser mic counterpart. The reason for this difference is due to the technology that drives the functionality of the mics. In condenser mics, the electrical principle being utilized is called capacitance. Capacitance works differently than inductance, although both rely on voltage being created by a moving diaphragm. In dynamic mics, the diaphragm moves the voice coil through a magnetic field, creating a voltage out of the electromagnetic field already there. In condenser mics, a voltage already exists within the capsule and the diaphragm movement causes another voltage to be created.

Unlike dynamic mics, the diaphragm in condenser models is usually thin, and a thinner diaphragm moves more sensitively to higher frequencies and to quieter sounds. Therefore, condenser mics are much more sensitive to both high frequencies and quieter sounds than dynamics. For this reason, condensers are used more liberally in the studio for delicate instruments, performances, and instruments with wider dynamics and more high frequencies (or; high-frequency nuances). Acoustic guitars, pianos, strings, chimes, cymbals, and voices are among the common instruments miked with condenser mics.

Power is required for condenser mics, whether from an external supply in a tube mic, phantom powering on most pro condensers, or an internal battery in some models. The mic simply won’t work without the charge to the backplate that creates the capacitance needed.

Prior to phantom power, condenser mics had separate power conductors to bring power to the backplate. As such, mics didn’t connect to standard 3-pin XLR cables-a proprietary cable was needed to connect power to the mic and to bring the signal down from the mic back to the supply box. The supply box then sent the final audio signal off to the preamp via standard XLR cables. Phantom power has the distinct advantage of traveling along the XLR cable directly to the mic as well as the ability to bring the audio down from the mic. This makes studio operation much easier, as now, there is a method of standardizing the cables between dynamic mics and most condenser mics. 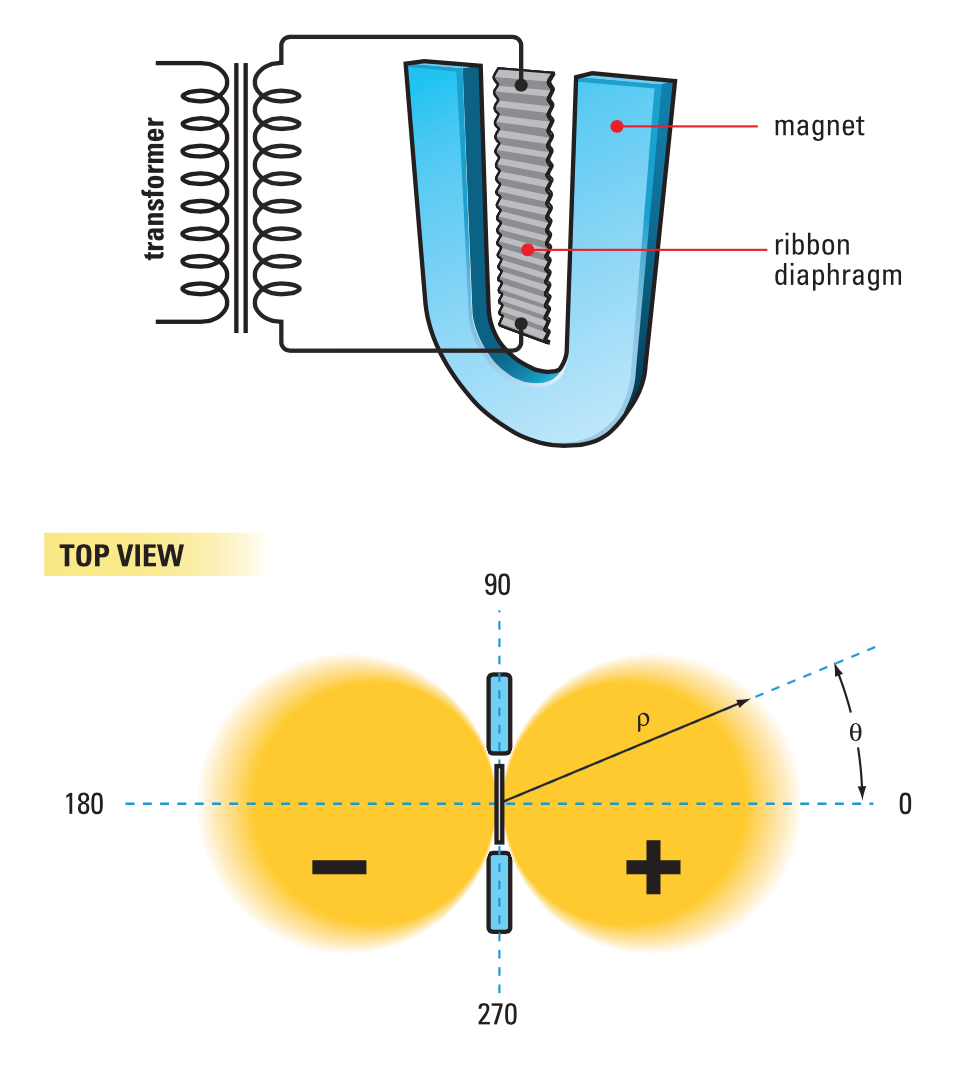 Ribbon mics are a type of dynamic microphone in that they consist of an extremely thin (and quite fragile) aluminum or other metal strip suspended between two poles of a strong magnetic field. The suspended ribbon reacts to the velocity of air particles rather than to the pressure, as in the case of dynamic mics. Many ribbon mics are fragile, like condensers, and are easily damaged by bumps, drops, bangs, and even extreme wind or breath blasts.

Ribbon mics have become en vogue recently, as they tend to have a warmer and darker sound than other mics. Ribbon mics lend warmth to the source, which can help smooth out some of the harsh and edgy quality of digital audio. While today’s digital signals are much smoother than some of the early CD quality recordings, some people still claim that digital imparts a “coldness” to the audio quality.

The “oddball” of the microphone bunch is likely to be the PZM, or pressure zone microphone. Originally mass-marketed (and trademarked) by Crown International, the PZM is effectively a boundary mic with a diaphragm that is not only parallel to an attached wall or floor surface, but also super close to that surface. The PZM typically lies on the floor or on the wall and captures sound that bounces off of the floor or wall. It is very useful in situations where a visible microphone would be a problem, such as a lectern, pulpit, or theater stage. The audience does not desire to see the mic—only the person requiring amplification.

The polar pattern is a graph representing how a mic will behave at different frequencies. It’s not so much a graph that says, “this mic captures high frequencies well,” or “this one is great for mid-range tones,” but, rather, a graph that says, “this one picks up high frequencies well from the front, but not from the sides or back.” In other words, this graph tells the story of a mic’s directionality.

Microphones come in a few different flavors when it comes to polar pattern and some allow you to adjust the polar pattern at the mic. The four main patterns are cardioid, omni, figure-8, and supercardioid.

Named after its similarity to a heart shape, the cardioid pattern basically describes that a microphone performs best when sound approaches it from the front and performs worst when sound enters from the rear. 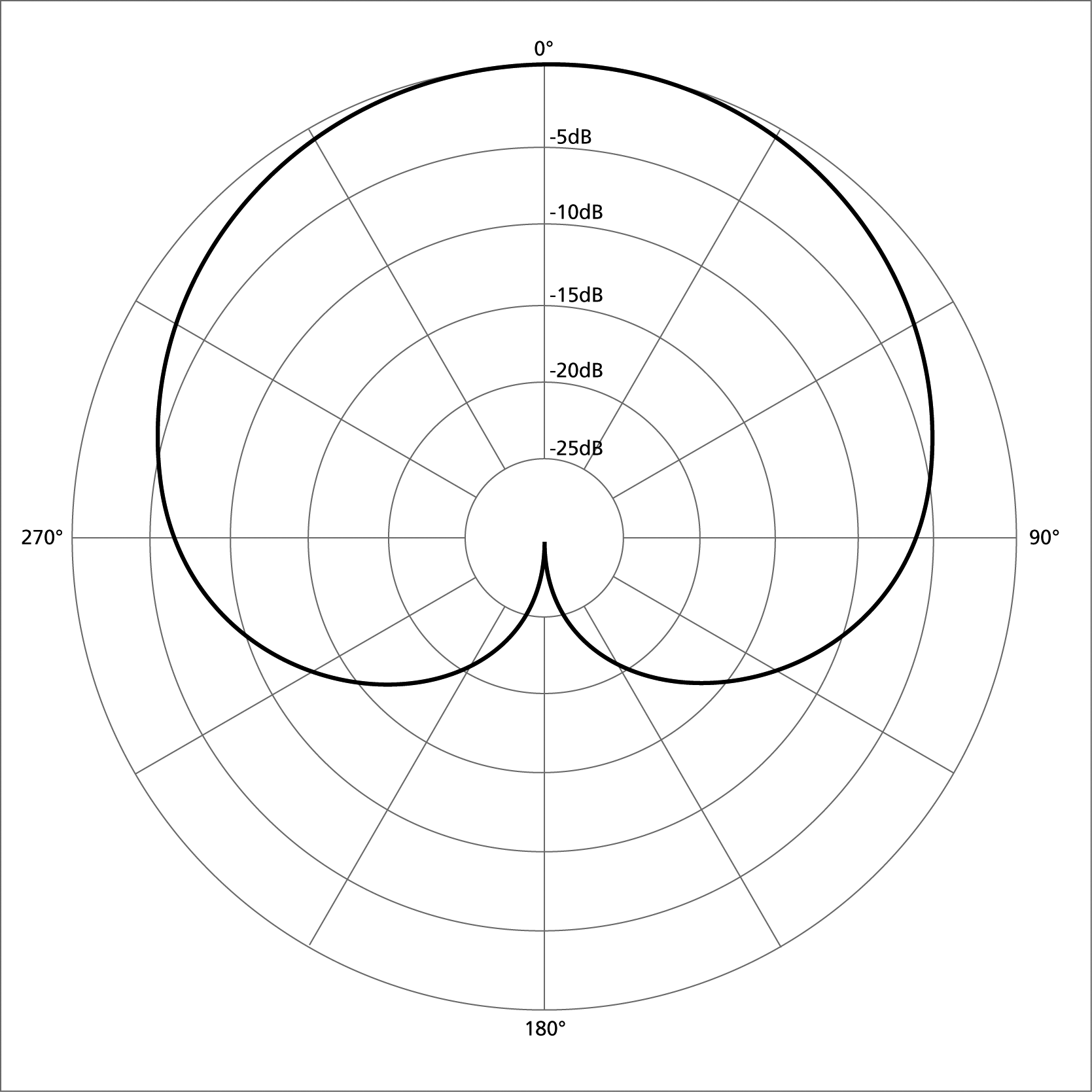 A mic that exhibits an omni pattern performs equally well no matter where the sound comes from. Whether sound enters from the front, rear, or from the sides, the omni exhibits the same sound response. 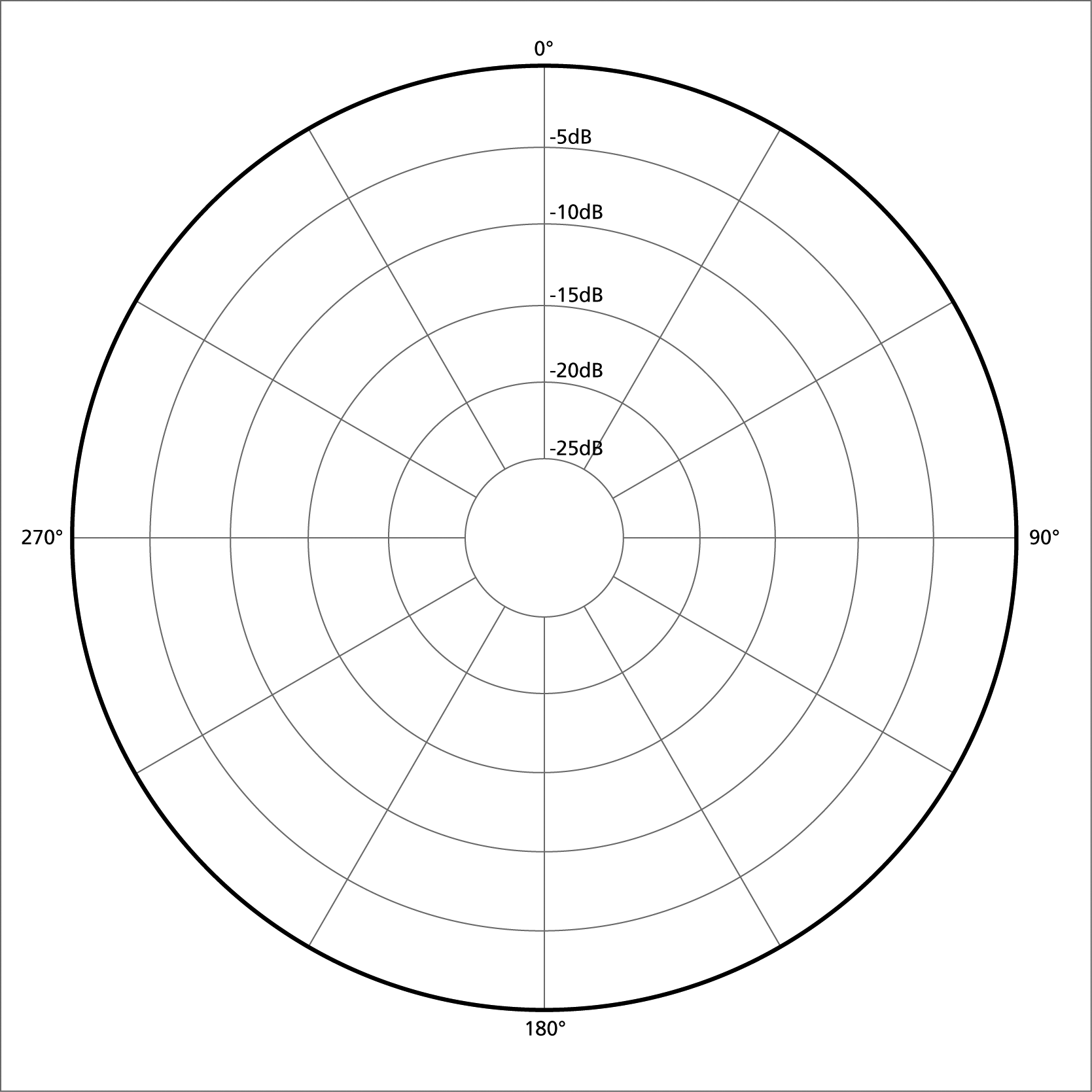 A mic that exhibits a figure-8 pattern performs best when sound enters from either the front or the rear and performs the worst when sound enters from the sides. If this mic is angled to the source, the sound quality will worsen as the front of the mic is moved away, but as the rear of the mic begins to approach the source, the sound quality begins to improve again. 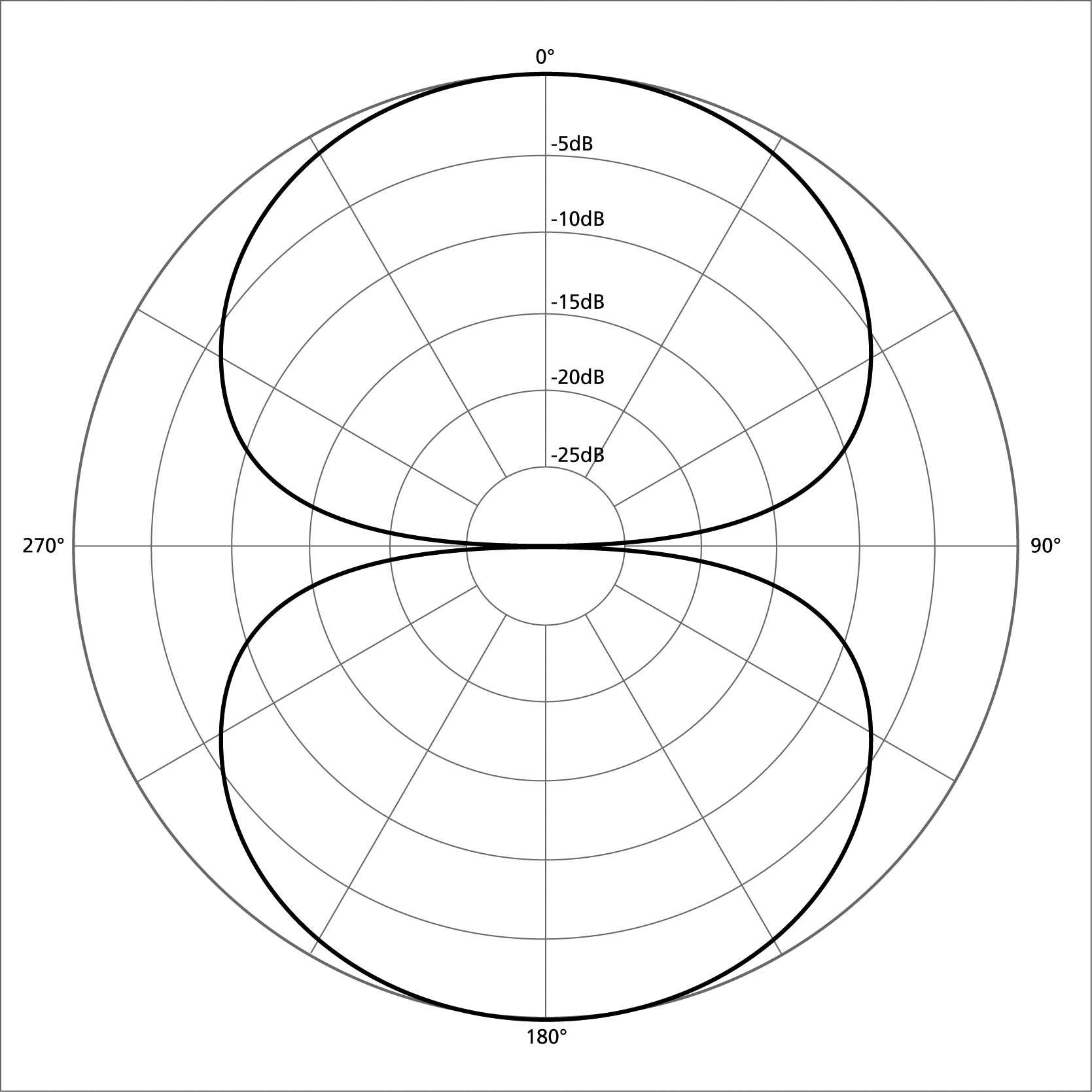 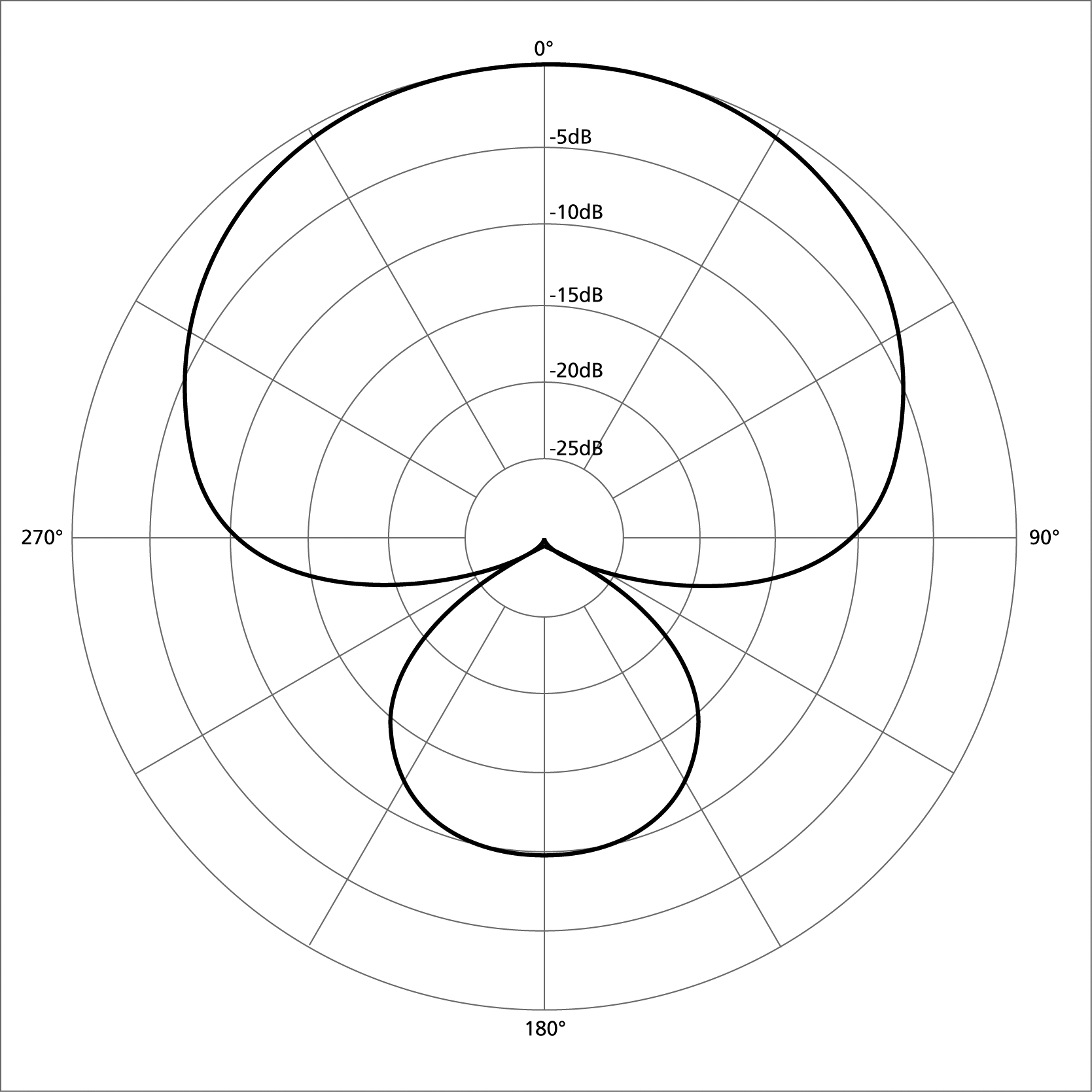 For most mics, the behavioral pattern changes with frequency. For example, most cardioid mics exhibit omni-like behavior in the low-frequency range. Bass has a tendency to enter the mic from all angles and gets much the same response due to the size of the wave. Mid- and high-frequency sound waves are much smaller and more prone to rejection at certain directions. As a result, mics perform differently at different frequencies.

There is one rule above all others in microphone usage and technique: In the end, it just has to sound good. This is, of course, a completely subjective experience—what sounds good to one person doesn’t sound good to another. People hear things differently and as a result, it’s a good idea to work with people that hear music the way you do.

The ability to identify the sound leads directly to the ability to fix the sound—not all sounds are bad as a result of the microphone! Again, experiment, observe, and adjust.

If you’re interested in learning more about microphones and placing them around a drum kit, click here to learn about our Core Producer Program