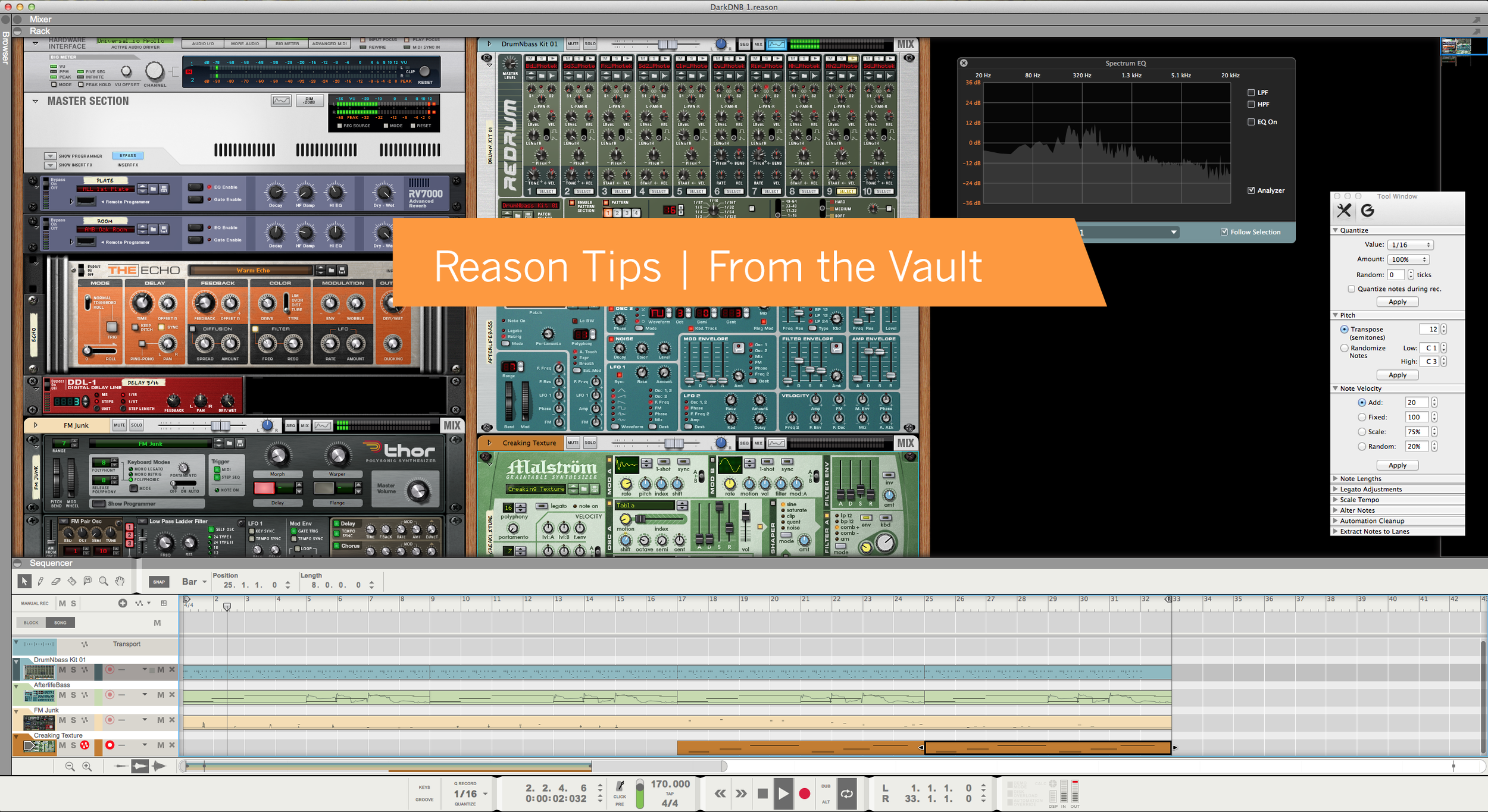 From The Vault | Reason Tips & Tricks

Take a closer look at the Reason 8 device browser, the new highlight focus for easy patch and preset auditioning.  You can now drag and drop any patch to create a new corresponding device in the rack.  You can also drag drum samples directly onto Kong pads.

Explore the updated navigational features that help you leverage your time & workflow. Learn to easily navigate from the Mixer, Rack & Sequencer views. Quantize and edit your midi information at the click of a button and co-ordinate each devices color with it’s associated mixer channel, clip & rack mount. See how you can detach windows to work seamlessly with multi-monitor setups.

Steve Heithecker walks you through the fundamentals of the sampling process in Reason 6 (which apply to the later versions as well).

Steve rounds out his sampling tutorial with Part 3, Sampling into Kong.

How to sample directly into Kong or ReDrum

In this series we’re going to look at one of the great new features in Reason 5. Which is the ability to sample directly into one of the devices. We have an XT, Redrum, Kong and NN19, that are all capable of recording from a live microphone. Anyone that’s used Reason for a while knows that this ability has never been there and everyone wanted it forever. It’s finally here and we’re going to look at it in all its glory.

Sampling itself is a bigger picture concept and there’s a lot of detail, so we’re going to breakup the overall concept into a number of different videos. Today we’re going to focus on the basic setup which is going to let us take audio from your interface and then just route it into Reason to get ready to sample.

The audio tab lets us choose an interface. I’m going to click in there, and you can see I have an ozonic multi channel. Which is an old empowered pro-tools interface that works perfectly fine for this. You’re going to have a different interface. You can also use built in microphone if you want to, the sound quality is not going to be good from your laptop or from your I MAC, but you can use that. I go ahead and I select my ozonic, and this is what I’m looking for here. I’m looking for the green check mark. The green check mark means that it’s accepted that interface, and it’s going function.

Reason loves to use this color protocol that green good, red bad, so if we got a green check mark. I’m going to close preferences, knowing that my interface is going to work. Before I do that, I should say, that if by chance you see that red X, depending on what your interface is, you may want to look that it’s a driver issue, something like that. You may just need to update your driver, but you need to have that green check mark, or this is not going to go any further than this.

I’m green, I’m good. I’m going to close the preferences. Now we’re going to think about routing. I’ve got my interface connected what next? I’m going to hit the tab key to flip the rack and I’m going to look at the audio io section of the hardware interface. This is definitely where the magic going to happen. You just need to know a couple of things. It’s not that difficult, but if you don’t have it cabled correctly, just like a real studio, this is never going to fly. The idea is, that we are going to bring audio from an interface, into the from audio input section, and then feed that, to the sampling input section and then feed that into a device.

There’s about 3 stages. Anyone of them off it’s not going to work, but once again this is not the difficult part of sampling. Let’s give an example. If I plug my base, into say, input 8 on a avid 003, the only thing I’m going to need to do here, is pull a cable from input 8, over to my left input, because it’s mono. I don’t need to go stereo with the base. I’m not going to do it because it would disconnect my microphone from recording right now, although people that know me, might think it’s a good idea. I’m going to just let that go and go back to the normal routing. Think it through. Depending on which interface I have, I going to have different options. It could be a 1 channel, 2 channel, 4, 8 channel, 16 channel interface. This handles up to 16 inputs.

You plug it in, look at the input in your interface, and just connect that same input into left or right. It’s pretty simple stuff. If you don’t do it right though, it’s not going to work. The next thing to think about is, sampling input. You can kind of think about the sampling input as a waiting area for your audio, because this is going to feed any of the devices, in reason. It’s going to be in an XT, in a 19, Redrum or the new badness in the neighborhood, which is Kong. The massive new drum machine which gets it own love in another episode.

Once you have the sampling input connected, we can then go ahead and start thinking about some levels, before we actually feed it to a device. I’m going to hit the tab key and flip the rack. Now we’re going to look at the levels. The levels right now, we can see, live up also in the audio io section. We can see my voice driving into the yellow, which is a pretty good level. The downside of using this, is we don’t really see any audio base numbers. We don’t see neg 10, we don’t see neg 2, we don’t see 0, we don’t see any of that. We see green, we see yellow and we see red at the very top. It could be useful if we had something that was a little more accurate and strangely enough, the other feature that I really love in Reason 5 is, big meter.

I hit the big meter tab in the top of the hardware interface and I now get a very accurate metering system. This metering system can be a sign to any input, or any output of any device, in Reason, so that you can meter it in going through. You can only use one of these so you do have to choose. How do I choose what I’m metering? You come up into the audio input and output section, and you can just click on an input or an output and that’s what you’re going to meter. We click a couple, and we see that’s there actually no level, because I have nothing going out audio 6. I don’t have anything coming in, say input 6, but we do see where I have a level, and so I’m going to select a sampling input to monitor.

That’s the direct selection. You just click on a square. You can also just change a channel, this way, like any other American does, except unlike every other American, you will not be using a remote control. It’s probably been 20 years since someone’s actually changed a channel without a remote control. Going out on a limb there, but I feel that’s probably pretty true. I have a channel selected, and that channel is, left sample input here, make that really happen. I’m actually metering a level for my voice. Guidelines would really be, let’s say from meg 38 to plus 10. If you’re close in that range, I think you’re going to have a pretty good level. Now the year test is the other way to tell with this. You want to sample something and then you want to play it back just to hear what you have. It’s still not pro-tools. We cannot compress, we cannot eq directly on that sample and process it.

It’s not going to be the same type of sampling that we’ll be recording into a more robust DAW, but that does not mean it’s not going to be awesome. You can still get really good sound doing this method. At this point we’re ready to feed sound to one of the devices. We’re going to get into the ENXT in the next episode for this, and actually sample. At that point, we’re going to bring in the editor. We will edit the way form. We’ll do some cool cropping techniques. We’ll do some key mapping, some root note, we’ll look at the sample management. We want to look at those in details, so we’ll do those in the next episode.