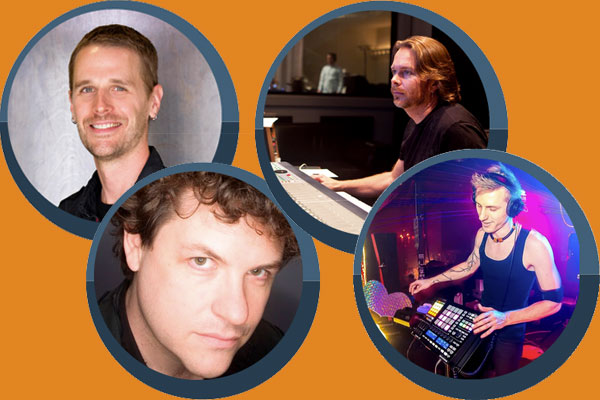 4 Experts Answer What They Love About Their DAW

Over the past few years as Pyramind’s Online Education Manager, I’ve had the pleasure of chatting with nearly all of our prospective online students before they make their decision to enroll in one of our programs. If there’s one thing I can say about the people I’ve talked to it’s that they have a broad range of experience coming in. We’ve had everyone from total beginners to touring musicians sign up for our remote, online classes.

One of the questions I get over and over again (especially from students who are just getting started) is:

Which DAW should I use to write music?

(For those of you not hip to the lingo, a DAW is the abbreviation for Digital Audio Workstation.)  It’s a bit of a loaded question. And you’d better be prepared for some seriously opinionated answers, depending on who you ask.

The answer I normally give to this question is “they’re all great tools and they’re only as powerful as the person using them.” It’s cliche, but it’s really the only fair answer I can give. The four DAWs we teach at Pyramind are all somewhere between version 8 and 11, which means they’ve matured over the years to handle just about any task, project, or genre you throw at them.

That being said… people have their preferences. Strong ones. So I’ve asked our resident experts about why they use their tool of choice in an effort to gain some real-world perspective on the issue. Here’s what they have to say:

What DAW were you using before and why/when did you switch to Ableton Live?

I’ve used most DAW’s under the sun at this point.  The one that got the most traction before Ableton was Logic  – which I still think is a beautiful DAW.  Eventually Ableton won out however, namely for its live performance integration and vast community of users.

The one thing I love most about Ableton is:

How quickly I can work!

For some reason there is this weird myth that Ableton “sounds like Ableton” – and that it’s a bad thing.  I think any DAW can sound good or bad – it’s all about how you use it!  You can DEFINITELY achieve a high quality, professional sound with Ableton – there is ZERO doubt.

What DAW were you using before and why/when did you switch to Logic?

Before dedicating myself to Logic, I had used every DAW out there. I was required to do so because of my activity in various studios in the early to mid-nineties. I HATED using computers for composing and was known to prefer playing my scores in real time from samplers into Pro Tools or on to tape instead of using computers.

Emagic, who originally invented Logic, sent a couple of nice folks down to show me Logic. I wrote a song on the spot. I loved that I never had to stop my creative flow to get Logic to set up a track. It was as fast as I was. I can’t say I fell in love with writing on computers, but I grew to love the process over the years, and now I’m way beyond full blown geek.

The one thing I love most about Logic is:

That it is hard to learn.

Anyone who wants to write, mix, and finalize their music or sound design without having to buy 3rd party plugins.

What DAW were you using before and why/when did you switch to Reason?

I was using tape and MIDI and analog hardware, and became an early adopter of Reason. I love hardware synths and such but the creation of the DAW based workflow has dramatically changed music production forever. The concepts of “Open”, “Save” and “Undo” are pretty sweet.

The one thing I love most about Reason is:

How easy it is to be creative.

What DAW were you using before and why/when did you switch to Pro Tools?

I’ve been doing this for so long that before Pro Tools I was using hard disc recording, before that ADATS, before that (20+ years ago) 4-tracks.

In my early DAW days I also used Logic and Reason quite a bit. I eventually walked way from Logic. It’s a great program but eventually I felt I could do everything I want and need to do in Pro Tools. I still pretty regularly slave Reason into Pro Tools using ReWire.

I switched to Pro Tools just to get modern DAW-based production and to have the best of all worlds (digital/analog). I still use a TON of analog gear but love the ease of editing and all the great stuff you can do with a modern DAW.

The one thing I love most about Pro Tools is:

In its modern state, it can do everything I want it to do.

The first one I hear all the time is “Pro Tools is hard.”

To become an expert at any modern DAW is “hard.” They are all deep and each has many idiosyncrasies. If you put in the time on any DAW you’ll get to where you want to go eventually.

Another myth is that Pro Tools is better for some genres than others. In 2015 and beyond, all DAWs are so advanced that any of them can handle anything. You could pick your DAW(s) based on personal preference of writing workflow, as well as educated decisions regarding sound quality. This is why some students and MANY professionals compose in some other DAW and then mix in Pro Tools.

Anyone who wants to have the highest possible sound quality (them’s fighting words!) and know the industry standard DAW.

What classes do you teach at Pyramind in addition to your role as the school’s Director of Education?

Tell us which DAW you want to learn more about: