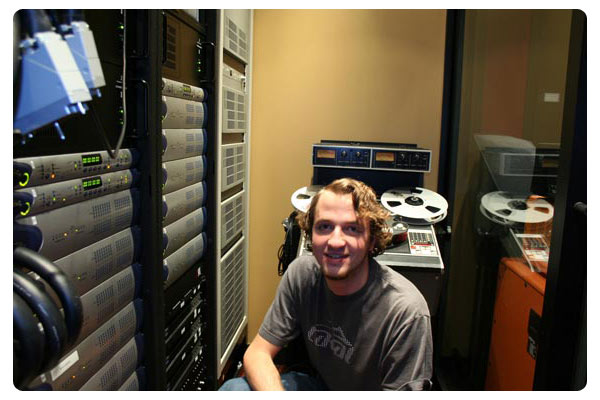 Alex Mikes is a great example of a student who has worked hard and dedicated himself to get where he is, having earned two gigs out of Pyramind – the Academy of Art’s Pro Tools lab and famed San Francisco studio Talking House where he gets to work with and learn from some of the top engineers and musicians in the industry.

We recently talked to Alex about his experiences at Pyramind, and Talking House.

Describe your experience at Pyramind. What classes and teachers had the biggest impact on you? Which ones were your favorites?

My experience at Pyramind was incredible! It’s such an intimate environment with such a knowledgeable and experienced staff that it’s hard to imagine anyone not learning what is being taught, and more. It’s hard to pick a favorite. But…

Matt Donner’s Mixing & Mastering class was one of the ones that had a huge impact on me. It taught me so much not only about mixing, but arrangement and the entire songwriting process.

I also really loved the ProTools classes. The fact that Steve (Heithecker) was teaching them was the only reason I woke up at 8 in the morning after working until 2am the night before. The man knows how to use ProTools in real life situations and he has experience to relate to what we learn, rather than just reading the book to us. Without being too dramatic and kissing up too much, if it weren’t for Steve Heithecker I wouldn’t have a job right now.

How do you think Pyramind best prepared you for your career in the music industry?

I learned absolutely everything I know about recording music at Pyramind. Period.

How did you get involved with Talking House? Describe your experience there, and how it has impacted you.

The first time I heard about Talking House, I was reading EQ Mag. Every month they fill the back page with an article called “Room With a VU,” which highlights a different studio in the U.S. and show its gear and unique features. Once I got about one-third of the way into their gear list, my jaw dropped open and I uttered a thunderous “Holy s—!” out of sheer disbelief. I immediately e-mailed them to inquire about internships, and I started about two months later.

I have had nothing but incredible experiences there. They have such a great thing going there that I feel so fortunate to be a part of it. They’ve got a great staff working for an awesome label with talented artists in an incredible facility. I’ve learned so much from just being there and helping out and paying attention.

It was made clear to me a few years ago that I want to spend the rest of my life recording music, and being at Talking House has done nothing but confirm that I’ve made the right decision.

The first time I walked through the door to Pyramind for an interview, I was so nervous. I thought I didn’t know enough to get into the school. My past experiences with interviews at schools were with administrative people with strict criteria and suits. So I dressed up nice in my friend’s clothes (because all I own are jeans and t-shirts) and I walked in defensive and skittish ready to explain myself like all my other interviews.

I had an appointment with Bryan, whose e-mails were signed as the Admissions Director, which intimidated me before I ever met him. But when I walked in, he was wearing jeans and a t-shirt and had a can of Coke in his hand! I was instantly relieved. I realized I’m not supposed to know anything before I come here, that they don’t care about my SAT scores, that passion for music is paramount… and that the phrase “Admissions Director” isn’t always something to be afraid of.

So I relaxed a bit and had a great discussion with Bryan about what I want and whether or not Pyramind can provide it. I quickly realized that this is where I wanted to go.

Had you done any music production coming into Pyramind? Talk about your musical background, and influences.

I grew up listening to the classic rock radio stations my parents listened to. So when I bought my first cassette tape it was the soundtrack to Mighty Ducks 2… but it had two Queen songs on it! I would play them repeatedly, amazed at how much emotion can be portrayed through sound. Eventually I learned to play guitar, which I’ve been doing for about seven years now. And I played trumpet in high school, which I didn’t think was cool then but now that I’m picking it back up I wish that I had stuck with it.

I’ve been influenced a lot by folk & blues artists who take advantage of a lot of different instruments available to them, but are still able to write a great song with just four chords and great lyrics. That genre definitely involves someone with a cassette recorder in their basement! So I began to write my own music, and recorded a little bit of it in the Sound Recorder program for Windows.

But as much as I enjoy it, I have always liked other people’s music better than mine. That was when I realized I want to help other people create their music.

Ultimately, I am going to be an engineer in a recording studio. That someone else owns. I’m not really into the whole entrepreneur thing, and I don’t mind being an employee. But in the immediate future, I am considering an apprenticeship in the Sound and Communication branch of the Electricians’ Union. I always liked to fix stuff and build stuff, lately all audio gear. So this apprenticeship would properly teach me how to do this, and ultimately it would supplement my career as an engineer. Everyone likes the tech guy who can fix all their gear.

If there is one thing you’d like to share with incoming or prospective students of Pyramind, what would it be?

Try your best to figure out what you want to do with your life. If this is it, then come to Pyramind. The learning environment is so intimate. The teachers are all so knowledgeable, and above all they are all genuinely nice people, which can’t be replaced by a sweet mixing board or whatever other bait those huge audio schools have.

And once you’re here, take advantage of the resources available to you! Ask Steve about ProTools when he’s eating lunch, maybe even Photoshop. Ask Dave to explain the transform window for the eighth time. Ask Matt to play guitar on your song. Ask Bryan where to get the best sounding and cheapest guitar cabs. Ask Deks how authorize your Waves plugins. Ask Anthony what the sixth note is in an E flat Phrygian scale is then argue with him about whether or not C flat exists. Ask Steffen’s wife how to write a resume. And use the studios!

Pyramind is no different from most opportunities you have to learn something from: You get out what you put in.